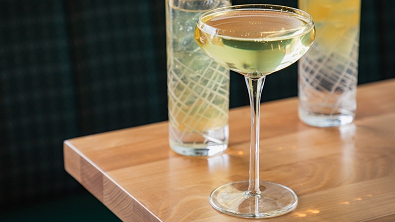 Lucas Bumba doesn’t remember too much about barn dances from his college days (I mean, does anybody?), but what has stuck with him after all these years are the apple pie shots. “They were made of high-proof grain alcohol, sugar and apple juice,” he recalls. “They were very immature and not sophisticated at all, but everything a college kid wanted.”

It’s been a while, and his tastes have grown up. So when it came time to create the cocktail menu for Milk Money, a new brewery/restaurant in La Grange, Ill., Bumba, now the restaurant’s general manager/beverage director, was inspired by the flavor profile of potent shot, but took the opposite approach and reimagined it as a low-ABV milk punch. “We lean into nostalgia and memories to tell our stories and let guests make their own stories with us,” he says. For his Ghosts of Barn Dances Past, he steeps dark, spiced rum with red apples (he prefers honeycrisp or gala) and caraway seeds for 48 hours. After straining the rum, he adds in citric and malic acids. The mixture is then added to hot milk (Bumba likes it just below boiling), until it splits and curdles. Everything rests overnight and is strained through a coffee filter and chinoise the next day. “The purpose of milk punches from the 1800s was to help remove the harsh flavors of the poorly distilled spirits by clarifying them with milk,” he says. “It would smooth things out, dial back the booziness, and add a soft, round mouthfeel.”

previous
NewCity,This Week in the Culture
next
Review: Milk Money Brewing stakes its name on the beer, but its food is the true marvel